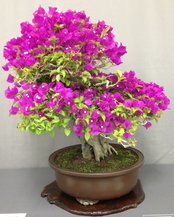 
Bougainvillea are a tropical and subtropical colorful vine. They are thorny, evergreen and some are fragrant. Bougainvillea are popular for their large, colorful "blooms" which are produced most profusely in the summer. Like the dogwood and the poinsettia, their colorful "petals" are really bracts (modified leaves.)

A native to coastal Brazil, the bougainvillea was discovered in 1768 in Rio de Janeiro by French naturalist Dr. Philibert Commerçon (also sometimes spelled Commerson). The plant is named after his close friend and ship’s admiral Louis-Antoine de Bougainville, who commanded the ship La Boudeuse that sailed around the world between 1766-1769, and in which Commerçon was a passenger.

Bougainvillea glabra is the most common variety used in the garden and is a long-flowering variety that can also be used for bonsai. Bougainvillea peruviana is less vigorous with glabrous leaves and purplish pink smaller bracts. Bougainvillea spectiabillis has the darkest green leaves and bracts of bright red or purple.  Bougainvillea have been hybridized, similar to roses, and have many named varieties.

'Bambino' varieties
Bougainvillea 'Bambino' varieties are new on the market and are good for bonsai. They are compact, shorter growers, and they have fewer thorns. Some varieties offered for sale are 'Zuki', 'Pedro', 'Zulu', 'Zeffa', 'Panda' and 'Jalibene'.

Bougainvillea has an extremely fine root system, will grow best in well-drained loamy soil (made up of equal parts sand, silt, and clay), mixed with organic matter which allow nutrients and oxygen to more easily reach the roots. Use a soil mix described as "quick draining" Do not use any kind of water-retaining soil as this may cause root rot and leaf spots to appear.  Be sure to select a well-draining soil.

Bougainvillea is drought and salt tolerant, and needs little water once it is established. In the warmer months, make sure your bougainvillea plant is well but not overwatered. Overwatering causes the plant to lose leaves, wilt or not flower. Overwatering may also cause bougainvillea plant to die from root rot.  Use proper watering by using this simple rule of thumb: If few leaves but some color – not enough water; If lots of leaves but little color – too much water; If a combination of healthy leaves and color – just right. Avoid frequent, light watering since this will promote a weak and shallow root system.

Bougainvillea usually does not have any problems with insect pests or diseases, but worms, snails and aphids may attack this plant.  Keep an eye out for moths and butterflies, which may lay larva which turn into caterpillars

Bougainvillea thrive outside.  For the best results put your bougainvillea in full sun. If you want good blooming, give them at least 5 to 6 hours of full sunlight a day at a minimum. More hours of direct sun is better.  Less than 5 hours and the plant may not bloom very well. Your plants will live in shade or partial shade, but may have little or no colorful blooms.

Bougainvillea are hardy throughout the South but young growth will be damaged by frost. For best results, night temperatures should stay above 60°F (15°C) while daytime temperatures can exceed 100°F (38°C) without ill effect.

Important techniques are used to promote the greatest growth and flowering as bougainvillea only bloom on new growth. Pruning is important not only for shape but for strength as well since bougainvillea tend to grow outward without creating branches unless their stems are pruned. They can be pruned hard if growth is excessive.

Trimming a bougainvillea, removing just the ends of branches or shoots. This could be anywhere from an inch to several feet, depending on the size of your plant.

Pinching -- removing just the very tip of new shoots. Since new shoots are only a few inches in length (that goes for all sizes of bougainvillea), pinching the tip requires removing just an inch or less. New shoots are usually green, soft, pliable, contain tiny leaves or the beginning formation of a bud at the very tip, and ‘snaps’ off easily when pinched. Pinching is usually performed by hand. It can also be done simultaneously while trimming,

Bougainvillea may be pruned, trimmed, and pinched at any time of the year. Bloom initiation does not depend upon trimming> Bougainvillea have a bloom cycle followed by a rest period whether trimmed or not. However, trimming or pinching is recommended after the end of each blooming cycle or at the beginning of the rest period to promote branching and budding for the next bloom cycle.

Bougainvillea that are pruned back bloom more readily.  The more you cut back, the more blooms you will have.

A bougainvillea blooms best when pot-bound so do not be tempted to re-pot unless you must. It is best to leave the plant in its original container until the roots have replaced all of the soil and you can’t keep the plant well watered. Root pruning is not recommended when re-potting bougainvillea, in fact, disturb the roots as little as possible because the plant might go into shock and take weeks to recover. Bougainvillea love to be pot-bound so pot in the smallest container available for the purpose you desire. The root system needs time to grow into each new pot.  It is best to repot during warm summer months, which will help to quickly produce new roots.